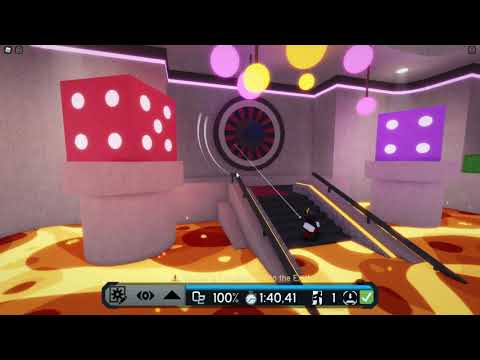 If you have any suggestions/criticism, or find any errors—please don’t hesitate to let me know!

Am I the greatest human to have ever graced the planet with my benevolent presence?

after watching the playthrough
the only real suggestion I have is to make it so when the camera moves away from the player, have it move smoothly. the instant snap looks a little weird imo.

New rare map - first of all, I’d like to say that I’m super happy to see you making maps again, as I’ve always loved your work. Secondly, I’ve got some constructive feedback I’d love to give on the map, as I’ve been meaning to give feedback ever since I’ve played it!

To start off, the map is in fact a crazy map, but I believe the room for error is WAY too small. Especially as you have to do a shortcut in the first room, even in a group run. What’s the point of the side route around those cards if you MUST do the shortcut to live?

It appears that you should go around the cards, but the only way to survive is to cut them, which shouldn’t be as difficult as they are currently.

To me, the lava speed should be nerfed, or that shortcut be the main route and made easier. (Also to add, the dice at the very beginning are very weird to jump from sometimes due to the float script, causing the second dice jump to the stairs to be very weird and sometimes just not make it on a perfect jump.)

Along with that, the camera POVs just feel a little too awkward. I really do like the one in the beginning and at the zipline, but the one at the final stretch just makes your movement awkward and has killed me sometimes just because it’s very sudden and changes your movement direction. I don’t know how you would fix this as it creates a very nice effect, but I’ll leave that up to you.

Another thing, in the final climb there is a random slide, which you can just jump over.

I suggest FORCING the slide, as it’s just useless otherwise as most people will just jump over it anyways.

Also, in the zipline section, the outside looks very out of place with the snow particles. This is because at the front of the casino, there is no snow, then all of the sudden there’s a lot, which feels super out of place. Along with that, the particles seem a bit too spammy, so maybe turn those down a little bit?

Finally, I feel like the falling planks at the 3rd button are very punishing if you’re late/staggering behind from the group. Having a way that people that are running through the map for the first time to fall down other than a mess-up can really aggravate people and may even not want them to play the map again. (Similar to the 3rd button in PC with the falling planks) Once again, this is up to you whether or not you change it.

I absolutely love the theme of this map. You’ve completely nailed it and I think this is an easy contender for the actual game. Take what I said with a pinch of salt as I’m not the greatest map creator either.

TL;DR - Good map; needs a little tweaking to make it not like a Crazy+, but overall super fun and great BGM pick.

wow, so we now a proper crazy map made by rare.

I liked 99% of what I have seen an played (even if I don’t play crazy maps that often) my main issue with the map is that it is a little to reliant on corner cutting to complete the map, and the map allows very little margin of error before the lava catches up (I can get that a crazy map should have little room for error but not to the point where after doing 1 major corner cut you still have less than 0.1s of error that can be made over the next 60 seconds).

other than that, I would say this would be one of my favorite crazy maps due to the attention to detail and really well tested gameplay

I agree with everything that coolzak said except the lava speed. I think you should fix the “main route” where the cards are by either removing it and make the shortcut the intended way or just remove the cards(or make it that you can jump on them). Imo the speed is fine(maybe a really, really slight nerf but it is crazy, so…). Probably my fav crazy this year tbh, amazing job.

needs a little tweaking to make it not like a Crazy+

There are only maybe 3 “long” jumps and the card shortcut thing. I dont think it is even close to crazy+ because the jumps are normal and the lava speed(except in the first room) is pretty reasonable. I still have hard time beating Blue Moon even when I am doing some shortcuts lol (Blue Moon is harder than Casino of Envy fight me)

HE LEAVES FOR 2 YEARS AND THEN DROPS A BANGER WTF

(edit: ok removed a vote to vote this map)

In blue moon you can at least get away as you can just not press any buttons and get far ahead of the lava. In this case, especially the beginning, the timeframe is so tight where it requires that shortcut even in a group play through, which shouldn’t be the case.